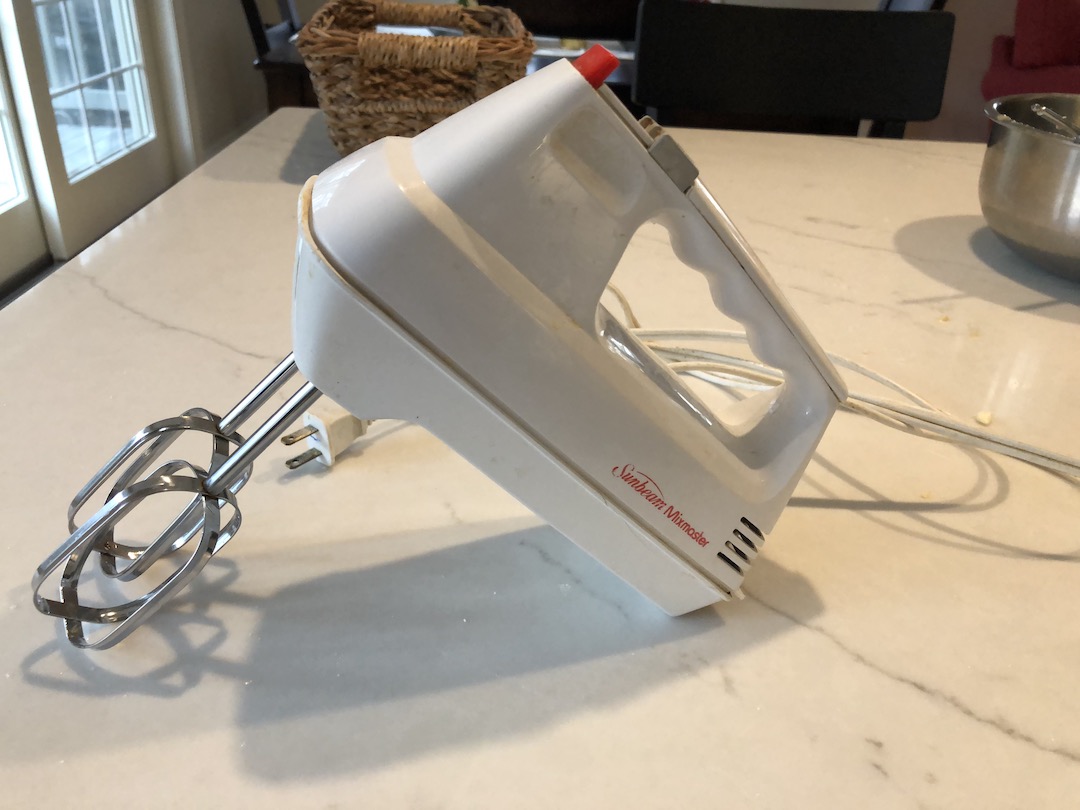 Anthropomorphism is a term that means attributing human traits, emotions, or intentions to non-human entities. I have found myself indulging in anthropomorphistic behavior of late. Only I have attributed human emotions to an inanimate object, my circa 1980 Sunbeam Mixmaster hand mixer.

Let me explain. As I was contemplating the upcoming holiday baking season, I decided that it was time to get a new hand mixer. The one I currently have was a wedding gift from my parents’ good friends, Ruth and Gene.  Ruth was a great cook. Unfortunately, that skill didn’t come with the mixer.

It’s a simple mixer really: only three speeds, no retractable cord, and one set of beaters. But it does the trick. I just felt like I deserved a new one. I put it on my Christmas list being too cheap to just go buy myself one. Yesterday, I was at my daughter’s house. She went down in her basement, came up with a box, and handed it to me. It was a brand-new Oster hand mixer that she had, along with some other unused wedding gifts, collecting dust. She patted me on the back and said “Merry Christmas.”

So, today, I was all set to use my new six-speed, ergonomically designed, retractable cord mixer with four different beaters. There is a dough hook, whisk, drink rod (whatever that is), and the beaters I recognized. I was excited to start the holiday baking.

Then, it happened. I went to take my old mixer out of the drawer to throw it away and a wave of anthropomorphism came over me. I thought my old mixer must feel a twinge of sadness. Or was it me? I couldn’t just discard it. I was flooded with memories of the times I spent with that mixer over the last 38 years.

Looking at the crusted-on flour on the handle and chocolate stains on the non-retractable cord, it brought back such good memories.

The mash potatoes I used to make as a newlywed trying to compete with my new mother-in-law for best cook award in my husband’s eyes.

The birthday celebrations of our kids and cupcakes I made for them to take to school on their birthdays until the teachers outlawed cupcakes for being too messy.

Ahhh…and the Christmas cut out cookies…first with our own children and then in a blink of an eye with the grandchildren. Funny how I was so much more patient with my grandchildren as they poured half the cup of flour in the mixing bowl and half on the table. And insisted on cracking the eggs again leaving half in the bowl and half sliding down the kitchen cabinets on to the floor.

Beautiful memories of a full life. Beautiful reminders of blessings from God.  It’s weird how the reminders of God’s presence in our lives come in such simple ways if we are open to it.

So today I retired the old mixer. I used the new one but I left the old one out on the counter to watch and as a reminder to me of God’s presence in the past which gives me the assurance that he is present now and will be, come what may. Look for those reminders this Christmas season. They might be in your kitchen or in your closet.