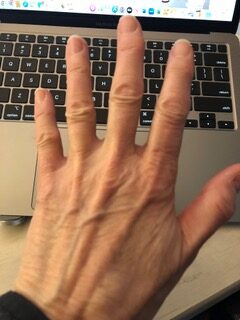 I believe that miracles happen all around us, every day. Especially last Wednesday.

In the afterglow of our two-day pseudo-Hallmark Christmas with our kids, their spouses, and the seven grandkids, my husband and I were headed to Madison on Christmas Day to spend the day with his mom and siblings. On the way there I was enjoying the quiet and the calmness, when I glanced down and saw that my hands were really dry and chapped. Must have been from doing all those dishes for the Hallmark Christmas. So, I decided to treat myself to some lotion and a hand massage. I removed my wedding rings, carefully set them in the soft fold of my new Christmas sweater, and proceeded to massage hand lotion in every crack and cuticle. It felt heavenly. In fact, so heavenly I lost track of time and before I knew it, we were at our destination. I immediately snapped back to reality, threw the lotion in my purse, grabbed my obligatory dip and chips and the annual Amaryllis bulb I buy my mother-in-law and exited the vehicle.

We headed home early evening so I could get over to my sister’s house to dog sit overnight.

(Bear with me, the ending of this story is well worth the tedium of the details. And I am warning you, it gets worse before it gets better.)

I woke around 3am to a raging headache and a not so happy stomach. I tried to wish it away but soon realized this wasn’t going to be good. Turns out, the stomach flu hit the family hard. One of the results of a Hallmark Christmas that they don’t talk about in the movies.

For the next two days I was in bed. But come Wednesday morning I was among the living again. I was sitting at my desk typing when I looked down and realized my wedding rings weren’t on my finger.

I panicked because I never take them off. My anxiety was cresting as I tried to retrace my activities the last few days. My first thought was that one of the grandkids picked up the rings from wherever I laid them down and now they are in the Fisher Price Farm silo in the basement or who knows where.

All of a sudden, a memory calmly rose above the anxiety. My heavenly hand massage. I ran out to my husband’s car so full of hope. They have to be in the cup holder in the front seat. Nope.

Then the horror struck. (Do you know why?)

I realized I never put them back on when we arrived at our destination on Christmas Day and when I bounded out of the car, they flew from the soft fold of my new sweater to the cold depths of the snow-covered street curb.

With all that was going on and not feeling well, I never thought about them until days later.

I said to myself, they are just “things” but the rings that I wear are my mom’s wedding ring and an anniversary ring my husband had made to match it. In the big scheme of things there are a lot worse things that can happen. But I really wanted to find them.

I called my sister-in-law and explained the somewhat odd request I had of her. She said she would take a look when she got home to see if the rings were still there but that the plows had been by earlier. As I waited to hear from her, I prayed to God and to my mom.

A couple hours later my sister-in -law called, she had found the anniversary ring. After some gentle persuasion she agreed to go back out one more time. Sure enough, ten minutes later she called and she had found the other ring. It was laying in the street.

I happy cried a bit, then thanked God and my mom and my sister-in-law for not giving up.

Miracles happen all the time. I’ve raised some eyebrows in the past for sharing these kinds of stories when there are people who are praying for much greater miracles and they don’t seem to happen. I can’t explain those situations but I believe that we still need to share all the miracles, even the small, seemingly insignificant ones, because it’s in the sharing of our miracles that God comes alive and we spread hope. The hope that gets us through the tougher times.

In this New Year, may you know miracles, large and small. May whatever is lost in your life be found. May you have a renewed sense of hope and may your hands never need lotion.